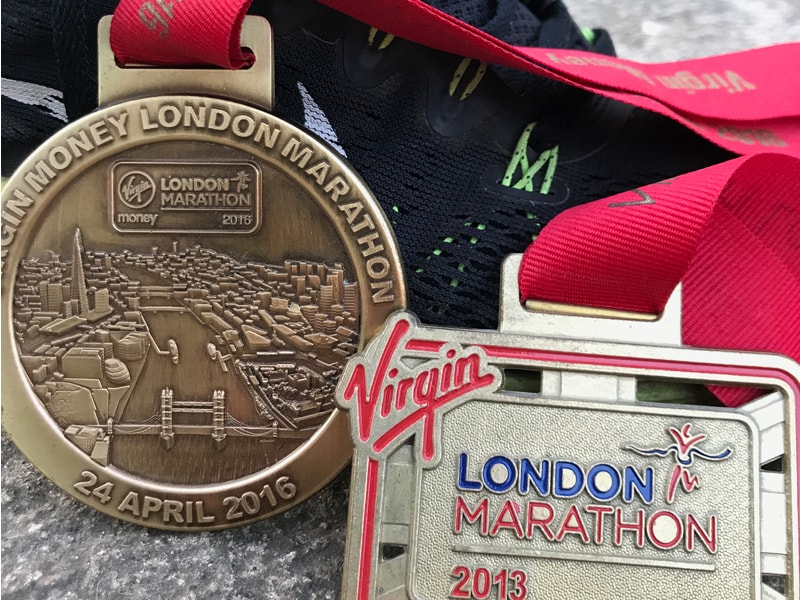 I always look forward to this time of year, the weather is starting to get warmer, we start to see more sunshine and it stays light for longer at night. However, April is always one of my favourite months and it is all down to one thing – the London Marathon. A 26.3 mile run that seems to embrace the nation and sees people push themselves to their limits to cross a finish line close to Buckingham Palace. As I write this it is Sunday night and I have just watched the highlights from 2017.

As a child, I would always sit and watch the Marathon with my family, often in awe of those that were undertaking the challenge. Every year I would say to my Mum that will be me one year, I am going to run the marathon. There are obviously thousands of running events across the UK, ranging in distances from 5km to 10km to a half marathon, but for me the only one I ever wanted to run was the biggest of all.

In 2013, I completed the London Marathon. When I crossed the finish line it was a fabulous feeling, I had finally achieved one of my biggest personal goals, it did bring a tear to my eye but I was too exhausted to express any other emotion. For a couple of weeks after the event I was constantly looking at my Finishers Medal. I was also delighted to have managed to raise over £1,200 for Asthma UK, a very worthwhile charity seeing as I have suffered with Asthma since I was a child.

It wasn’t until a couple of months later when I was reflecting on the challenge that I felt something was missing. I was struggling to remember much of the run apart from the pain that I felt from about mile 14 onwards. It wasn’t the memory I was hoping for. Yes, I completed the race but there was this nagging voice in the back of my head saying you didn’t do that right, you could have done better, you made a lot of mistakes. I had a vision that I would run the whole distance, but I didn’t, I had to stop and walk for a short period, it was only for about 10 minutes but I still walked – I didn’t want to walk!

I was asked quite a few times after the event whether I would ever run it again and my immediate response was no. However, after a few months I started to think about how I could have performed better. When the 2014 Marathon came around again I watched in awe but the biggest disappointment was that I was struggling to picture myself running, all I could see was pain and failure. It was at this stage that I knew I had to try again, I had to put right the mistakes I made and I had to enjoy the event.

When the ballot places were announced for 2015 I applied and was fortunate to secure a place.  Second time around this was all about me, putting things right and running correctly. There was no charity to run for this time, the only goal was to get to the finish without walking. I did have to defer the race for another year due to injury but on 24th April 2016 I ran the Marathon again. I had a strict training programme, which I stuck to, I had the right running kit (including food) and I crossed the finish line at approximately 2.10pm without walking. This time I have very fond memories of the race, I ran 50 minutes quicker than in 2013 and I can remember every step I took. My original mistake had made me stronger, I learnt from my errors and I put everything right, I ran the perfect race which I will remember forever.

When I consider my journey as a business owner there are many similarities. I am in my seventh year in business and it continues to be a constant learning process. I have naturally made mistakes but each one has made me stronger. After every mistake, I spend time evaluating it, making sure I learn from it and putting things right. Over the next couple of years, I expect I will continue to make the odd mistake but I am OK with that, I know they will make me a better business owner and that I can further develop my skills.

In simple terms mistakes make us stronger, don’t be afraid to make them but ensure you learn from them and correct them as soon as you can.

Do all good things need to come to an end?
Positive distractions